These informations were mostly gathered through my own experience, from watches I actually had in hands. They reflect what I observed and are not the holy truth. Page updated December, 3rd 2022.

King Seiko and later Seiko KS was the high range of automatic watches introduced by Seiko Daini in the early 60’s. The first models, and until 1968, had hand wound movements, the Seikosha 54 seen in the Cronos and some early Champion Calendar and later, the 44 and 45 calibres. The first King equiped with an automatic movement has been launched in 1968, with the newly 56xx movement developed by Suwa. A couple of years later, a parallel range has been introduced, the KS Special, based on the Daini 52xx movement. This KS/KS Special couple is similar to the LM/LM Special couple. They will live together for ca 5 years, until Seiko abandons the King range. In the 70’s, and in addition of the classical designed KS models, Seiko proposed the excentric KS Vanac/Vanac Special range with the same calibres. All these automatic models had “Hi-Beat” 28,800 bph movements.

The first King was introduced in 1961 by Suwa and mostly replaced the Cronos range, sharing the same Seikosha 54 movement. These models are rare today, it is very difficult to find one.

In 1964, Seiko relaunches the range and bases it on the Seiko 44xx movement (44, 4402, 4420). Today, the 44KS is the most popular range among the Seiko enthusiasts. The 44KS has been proposed until 1968, when Seiko launched the Automatic KS. They however kept a hand-wound KS model in their catalogue, the 45KS

In 1968, when Seiko relaunched for the third time its King range, it chose to keep a hand-wound model, based on the 45/4502 movement. The design of this 45KS family is similar to the then popular 56KS/Lord Matic one. Some models were marked “Superior Chronometer officially certified”.

The 56xx family is a big and famous range of automatic movements, that equiped the Lord Matic (5601, 5605, 5606), the King (5621, 5625, 5626) and the Grand Seiko (5641, 5645, 5646) as well. The versatility of this calibre, its thinnes, lead to an increased diversity of King models : time-only, date or day & date configuration. In 1968, Seiko decided to give more coherence to its production by sharing not only the same movement family for their mid- and high range watches but also some cases. We can imagine this was made to increase the profitability of their activities.

The King 56KS is the most commonly found Seiko King, they probably sold hundreds of thousands of them from 1968 to 1975. Many cases are “monobloc” ones, the movement can only be accessed by the front, especially the first years of production. Until 1971, all cases had the famous golden coin on the back, excepting the Vanac range.

For a short period, some models had the mention “Chronometer officially certified” on their dials.

As I wrote earlier, the Daini factory launched its own KS range in ca 1970, with the 5246 movement. This calibre is more sophisticated than the 56xx, with its instant day and date shift at midnight. The quickset is not concerned either by the weakness of the plastic wheel of the 56xx since it is made of metal.
The design of the 52KS is quite classical too but with something more typical from the 70’s.
Generally speaking, the 52KS is way rarer than the 56KS. Some models were “Chronometer officially certified”, as for the 56KS.

In ca 1970, following the trend of the 70’s, Seiko started to produce more casual KS models and branded them “Vanac”. I couldn’t find any explanation about that name. The Vanac range was available with the 56xx and the 52xx movements (Vanac Special). They had almost all a special design and all had stainless steel bracelets. The dials could be green, blue, brown, purple,etc. The crystals were often facetted, with different patterns as well. Finally, the cases could be square, oval, rectangle… They actually were quite close to some Seiko Lord Matic but with a better movement.

In 1975, when Seiko decided to end the production of its King, it also decided to stop producing high range mechanical watches to focus on the quartz and on cheaper automatic models (Seiko 5, Seiko 7009, 6309, etc…). So, this was the end of the King, it remained without heir.

Finally, and following a general trend in watchmaking, Seiko relaunched in 2022 a full range of King Seiko.

The Seiko King for sale 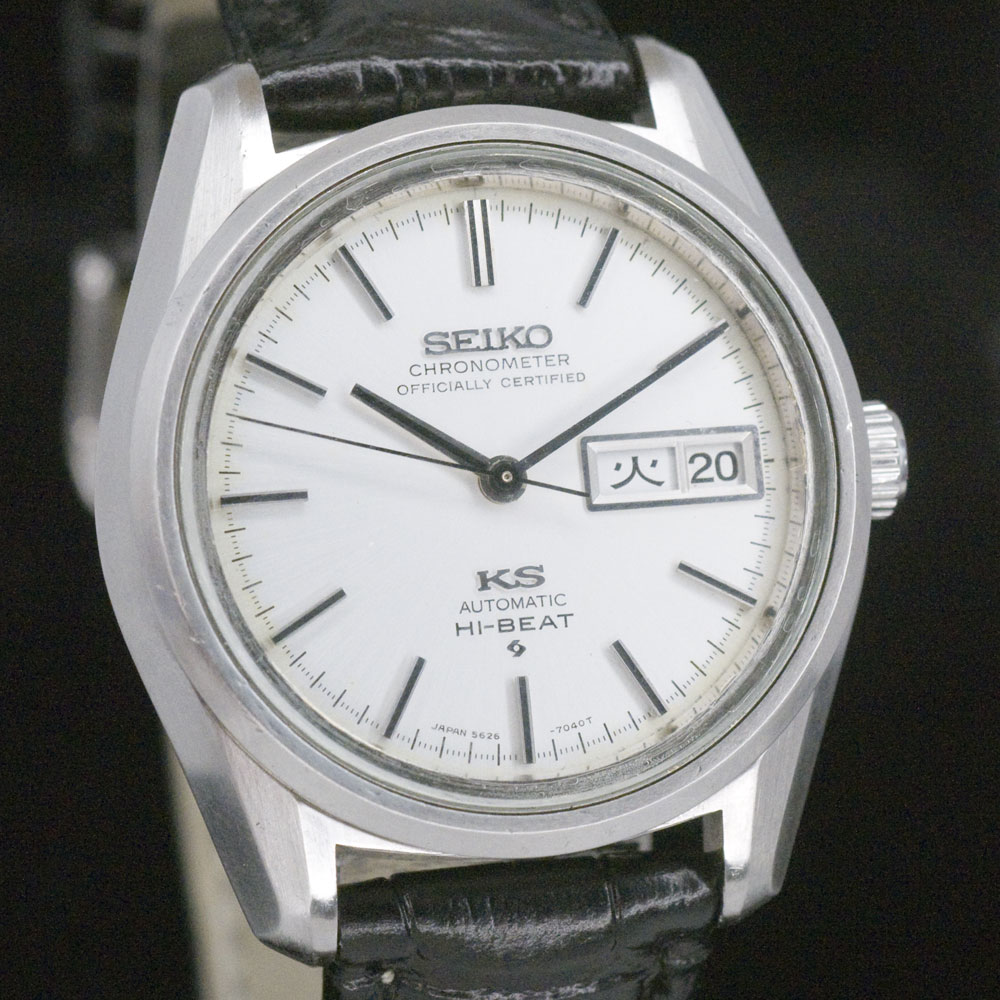 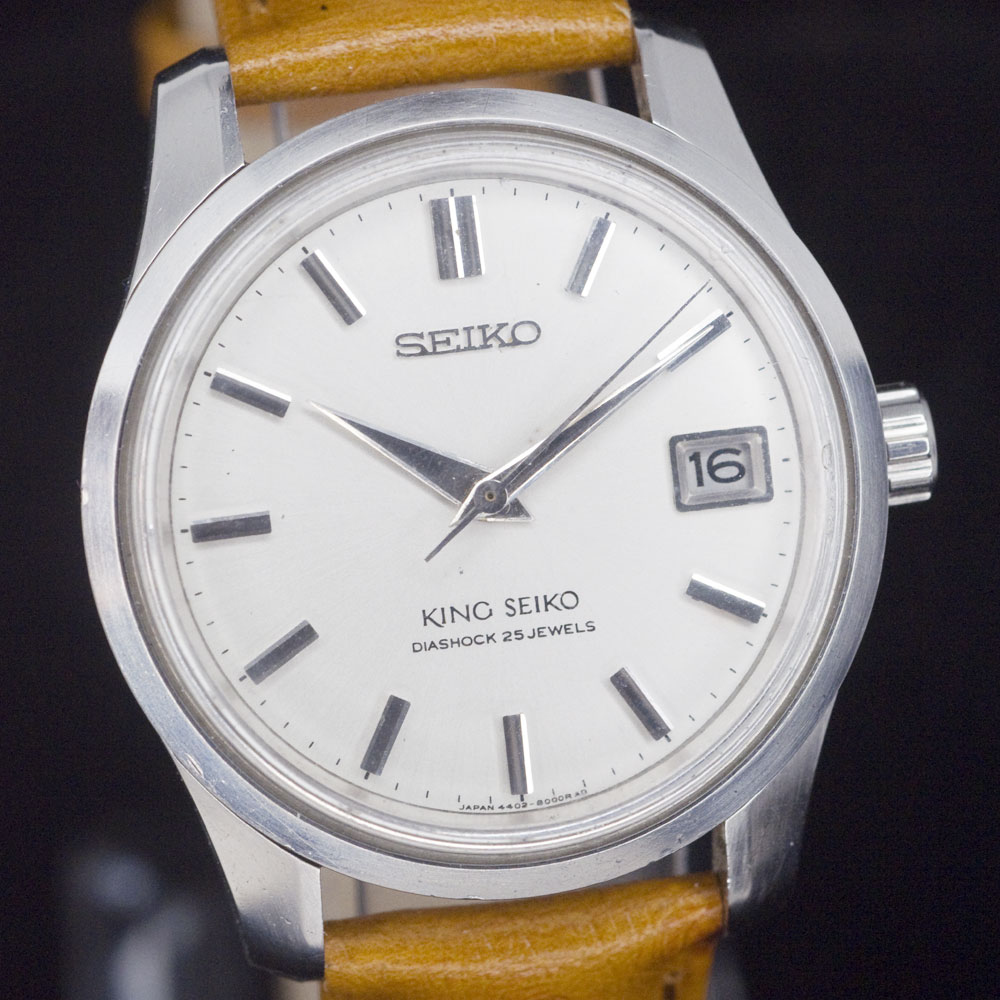